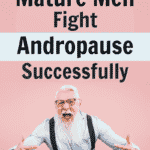 Consuming one shake each day – made from freshly blended vegetables – can accomplish more than you might think. Andropause refers to the health challenges a man faces as he ages and his hormone levels drop. An anti-inflammatory diet – including a daily green smoothie – can help mitigate andropause symptoms in mature men. See the video lower within this article for motivation.

Symptoms associated with andropause include:

How to Age Manfully

If you are male and over 38, then you need to know what andropause is and how to navigate it successfully:

As You Get Older, It Matters Even More What You Eat

Improved nutrition is among the smartest interventions to combat accelerated aging.

A strategic part of an anti-inflammatory diet is the freshly made green smoothie.

However, green smoothies are often misunderstood and poorly made.

The way to age manfully is to face it square-on. No head burying in the sand; no thinking about it tomorrow. Man up, and think about it now:

If you’re a guy who is interested in successful, healthier aging, your first step is to consult your healthcare professional and to allow yourself to be curious and proactive.

If you really want to improve your health, stop thinking of testosterone as just a sex hormone. It’s much more than that.

When we speak about aging, we say things like “after 40” or “after 50,” however when you look at the actual data (the Centers for Disease Control offer some fascinating data in downloadable spreadsheets, see Sources below), you discover that at age 45 is when statistically there is a significant jump in health challenges (particularly tumor diagnoses).

Many men wait until the first big problem presents itself before scrambling to devise a healthier plan to prevent accelerated aging.

Why not prevent disease outcomes before they have a chance to manifest?

The best part of being an adult is the increased potential for self-awareness and serenity as you become older and wiser.

Successful aging is realized within your own ability and willingness to create abundant joy, meaning, prosperity, and health in your everyday life.

If you are male and over the age of 38, then you need to know what andropause is. Otherwise, you won’t know what’s going on when andropause happens to you.

Green smoothies are delicious and filling and can help you decrease stomach fat. I learned this from personal experience.

Here’s how it happened:

I was chubbier than I had been in my entire adult life.

Even pants in waist-size 36 were starting to feel too tight and uncomfortable.

I had thought I was already eating kind of healthy and exercising three times a week, so I was disappointed that I had so much fat and width in my midsection.

I was already familiar with the research that established a connection between an increased risk of mortality for every extra inch of waist size, so I definitely wanted to decrease my stomach fat.

Around this time, I had to film a real estate video, and I tried to disguise how fat I was by untucking my shirt – see Before Photo below.

Shortly after that, I heard about a family of four who was able to turn their health completely around by adding more raw foods to their daily diet.

So, I figured I would also experiment with adding more raw foods into my daily diet.

Hey, it was worth a shot.

I started with my morning protein shake.

I went online to see if I could find a recipe, and I happened upon a site called Vegan Lunchbox, in which the blogger described adding some frozen organic spinach to her morning blended beverage.

Spinach!? In a protein shake? I honestly hadn’t even considered that before.

So, even though I wasn’t a vegan, I tried adding a little spinach to my next morning’s shake, and, honestly, I couldn’t even taste it. I was surprised!

I also noticed that the energy I got from the shake was sustaining (no sugar rush followed by a drop). Maybe I was onto something?

So I decided to start trying to add a little cucumber to each shake, too.

Again, I noticed a subtle, positive difference in how I felt after drinking it compared to my old shake recipe.

Now I was adding a bit of spinach and cucumber to each shake each morning. I was kind of getting into it, so I upgraded from my $40 blender to a new Vitamix (which will blend practically anything).

A short time later, a friend of mine mentioned that she saw a naturopath who had helped her entire family become healthier – even their allergy symptoms were disappearing naturally.

I was intrigued, so I went and saw their naturopathic doctor, and I learned that he referred to his morning blended as a “freshly made green smoothie” (not a “protein shake”).

The naturopath suggested I start experimenting with adding more vegetables of different types – including dark, leafy greens – and that I begin to gradually reduce the fruit.

He taught me how to pre-soak raw nuts and seeds to infuse my smoothies with more clean fat and quality protein.

The funny thing is, I hadn’t truly noticed the extent to which the fat had been melting away until a friend took a video of me while I was exercising (see video).

I started having fun experimenting with different ingredients. I’d go to the farmer’s market every Saturday morning and buy produce, come home and wash it all, dry it (in a salad spinner) and bag it in these mesh vegetable bags I bought online.

Then, throughout the week, I’d make fresh green smoothies. Always for breakfast (sometimes for lunch, too, and sometimes, for dessert – although, for dessert, I’d make them super thick and serve them in a bowl with crunchy toppings, like it was soft-serve ice cream or frozen yogurt.

On days when I also had a smoothie for lunch, I used different vegetables, fruits, and nuts than I used in the morning smoothie so that my second smoothie of the day was always completely different from my first.

Well, that changed everything.

I continued dropping fat around my waistline, and I started feeling stronger. I barely noticed losing weight because I enjoyed seeing what my fancy new blender could do. I was starting to believe I could decrease stomach fat.

Because I started to feel better – my mind was more clear, my eyes were less puffy and red, and even my tongue looked brighter and less yeasty when I woke up each morning – I started adding an extra workout each week.

This happened naturally as a result of having more physical energy.

Also, to combat the sedentary effects of working in front of the computer all day – the downside to being a writer – I started to go for a short walk each evening right before dinner.

Slam cut to today. I feel strong and lean; at age 57, I feel healthier than I’ve ever felt before.

How to Decrease Body Fat by Drinking Freshly Made Green Smoothies

A freshly made green smoothie each day will do wonders for your health. Green smoothies can help to detoxify your body while infusing its cells with nutrients.

Also, working out more will help you lose stomach fat.

However, I also believe that when a person’s overall cellular health improves, their metabolic system will also improve. And when metabolism is healthy, it makes it easier to decrease belly fat.

The most challenging part for me in describing the power of green smoothies is trying to explain what they actually are and how they taste – because many people (when they picture green smoothies in their mind), imagine a canister of protein powder that you buy at the grocery store.

Green smoothies – though they may contain a bit of powder as one of many ingredients – are freshly made, loaded with real ingredients, and a full meal unto themselves.

Once you make green smoothies, they taste amazingly good (and, as one surprised and delighted fellow recently put it, “not like drinking Shrek”). You can feel the sustained energy “high” after drinking one. Green smoothies are crafted from raw foods; over time, you will discover that they help your body decrease stomach fat.

When I started drinking green smoothies, I wasn’t trying to lose belly fat or any weight at all. I just wanted to be healthier, stronger, and have more energy.

I was thinking long-term – to get as many nutrients and superfoods into my body as I needed to feel fantastic, extend my lifespan, age successfully, and prevent illness.

But then, a funny thing started to happen: my waist started to shrink.

If my andropause story intrigues you and you would like to experiment with a bit of green smoothie-making to see if you can lose belly fat, too, I encourage you to go for it. However, I recommend that your emphasis is on improving your overall health.

Coming from a positive mindset of honoring your body will eventually help you more than just focusing on the cosmetic changes.

Save Time Making Fresh Green Smoothies So You Can Fight Andropause

Making a green smoothie doesn’t have to be labor-intensive as long as you have the right preparation.

Green smoothies are not that hard to make, though sometimes I find that early in the morning – when I’m groggy and without my wits (exactly when I don’t want to make a smoothie) – is when I benefit from a smoothie most. It’s as if I need a green smoothie just to give me the energy and alertness I need to make a green smoothie.

Of course, you still can’t consume more calories in a day than you’re expending to decrease body fat.

Ask your own medical doctor how many vegetables are ideal for you and if freshly made green smoothies might be beneficial to the unique needs of your own body.

How to Food Prep Your Smoothies

The best way to approach this is to do some preparation for your green smoothie beforehand. Spending some time preparing your green ingredients once a week is far easier.

I head to the farmer’s market every week to buy a week’s worth of produce. I pick up all my dark leafy greens: spinach, kale, arugula, swiss chard, parsley, sprouts, and microgreens (along with celery, cucumbers, fruits, etc.). I keep most of the ingredients in washable produce bags.

Back in the kitchen, I wash the greens and put them in the salad spinner. Once dry, the greens are evenly placed in separate bags.

Now, in anticipation of when I wake up, I’ve just simplified my steps: I pour one of the bags of “green leafys” into the blender, then add the extra ingredients – such as fruit, seeds, nuts, plant-protein powder, spices, and ice. No thinking, no fuss, and best of all: no washing. I can start drinking my smoothie first thing in the morning and have a great start to the day.

Strategic nutrition can help lessen many of the undesirable symptoms associated with andropause.

Pin this article to look at again later:

Leg Day: A Lower-Body, Functional-Training Workout • Over Fifty and Fit

Supple VS Sour: Avoiding the Mental and Physical Rigidity of Getting Older

[…] Recent research – a study sample of 153,000 adults in 50 states – revealed that the vast majority of people are not managing all four of the most-basic fundamentals of wellness: […] 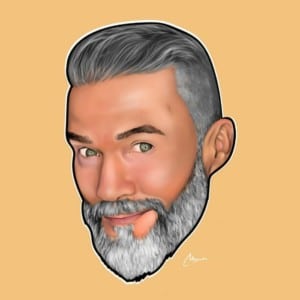