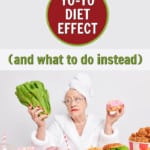 If you are over the age of 50 and have ever tried to lose weight with restrictive eating, you may have experienced the yo-yo diet effect. This is where your weight fluctuates up and down like a yo-yo on a string as you alternate between eating normally and calorie restriction.

The pattern can be discomforting and counterproductive. Fortunately, there’s something you can do about it.

Here’s what you need to know about the yo-yo diet effect, how to avoid it, and what you can do instead.

Typical Challenges of a Yo-Yo Diet

Everyone worries about their weight sometimes.

It can be frustrating to go from doing everything right for a while – and feeling proud about it – to then sliding into previous habits, gaining back the pounds you lost, and adding a couple of new pounds on top of that.

This is a typical yo-yo diet pattern.

It’s extremely common and can be deeply disheartening for the dieter who has been working hard while on a sort of emotional roller coaster.

If you’ve been dieting for any length of time and haven’t seen results, or if you’re one of those people who has lost weight only to put it back on again, there’s probably something in your life that causes you to go off track when it comes time to watch what you eat — and this is the yo-yo diet effect.

The following tips should prove helpful.

The yo-yo diet effect occurs most often when someone is trying to lose weight too quickly.

The human body has evolved over the millennia to protect itself from periods of famine.

A body will hold on to fat cells as a means of creating emergency energy-storage tanks. That way, when you’re crossing the desert or stranded in a snow blizzard and experiencing starvation, you’ll be less likely to die.

Any time you’ve been on a very restrictive diet you have signaled to your body “famine is an expected part of my experience” and so naturally your adaptive body will recognize that fat-cell storage is still a necessity.

To understand this better, it’s helpful to adopt an ancestral perspective. After all, it’s only recently that manufacturing and industrialized foods have become a reality. In most of human history, periods of famine were fairly standard.

Therefore, in order to prevent metabolic alarm bells from going off inside your body, it’s wise to lose weight gradually – usually reducing fat by approximately one pound (0.45 kilo) each week.

An exception to this would be if you were, say, 5’2″ and 260 pounds (118 kilos). Morbidly obese is an unfortunate term that sounds judgmental but is in fact a scientific way to convey that a person is more than 80 pounds (37 kilos) above their ideal weight. In such a scenario, losing weight at a faster pace than one pound each week might be appropriate.

We human beings are peculiar creatures. It takes us a year to add 40 extra pounds, and yet we expect to successfully lose those 40 pounds in six weeks and keep them off permanently!

In reality, slow and steady wins this race.

The whole concept of a standard diet is very middle-of-the-last-century.

On the classic diet, you’re supposed to eat a certain way for a short while, lose weight, then go back to eating the way you always have, and still keep that lost weight off?

Instead of adopting a temporary diet, implement a lifestyle change.

The anti-inflammatory lifestyle is a method of living that seeks to remove unnecessary irritants from your experience. Any habits or behavior patterns that don’t help you to thrive in the long term are released.

The dieting part of the anti-inflammatory lifestyle usually involves eating mostly vegetables, and some meat and fruit (how much protein and carbohydrates one consumes is based on physical activity level – they have to be earned).

Because it’s lower-carb eating, one usually loses at least 8 pounds (3.6 kilos) of water weight within the first couple of weeks, but this is natural and does not need to count toward the “only one pound a week” formula, which refers to fat loss specifically.

Once you successfully reach your target body weight, you can then experiment with having a celebratory, weekly “cheat” meal that allows for a bit more calories and carbs.

Your body’s ability to expend calories efficiently – and use fat cells for energy – peaks up until about age 21.

Then it stays about the same, until after 50.

Though there are individual metabolic differences based on genetics, generally your ability to burn calories effectively slows down as you approach the age of 60. This is a reason why the yo-yo diet effect is best avoided in mature years; the body has a harder time bouncing back from aggressive treatment.

Risks of the Yo-Yo Diet Pattern

We all know that dieting is a common response to weight gain.

Unfortunately, this can lead to the yo-yo effect — the repeated loss and regain of weight — which can be particularly problematic after age 50.

Yo-yo dieting may increase the risk of several health concerns, including:

How to Avoid Dieting and the Yo-Yo Effect

To avoid the yo-yo diet effect you can follow a healthier eating plan:

A key aspect to creating a healthy balance in your weekly life is to put your health as the top priority.

Your body needs fuel in order to function, and food is the key element in that equation. Eating well doesn’t mean you can eat whatever you want — it means eating foods that are good for your body. In other words: nutrient-rich foods rather than empty calories or empty carbs.

A primary focus here is making sure those nutrients are getting into your system — and if they happen to help with weight loss at the same time? Excellent.

Healthy eating habits are not just about what you eat. They’re also about how you think and feel about your body, as well as how much time you spend exercising.

Eating right is a lifestyle choice that requires constant attention to all aspects of your health, not just one aspect. In other words: it’s not a diet.

What is a “diet?” A diet involves strictly limiting or eliminating certain foods or food groups in order to lose weight quickly through calorie restriction. You can go through the diet plans you want, but if your emotional eating habits aren’t under control — if you’re still making unhealthy emotional choices when it comes to food — then all those healthy choices will be for naught because they won’t last long enough for them to become part of an overall healthy lifestyle pattern.